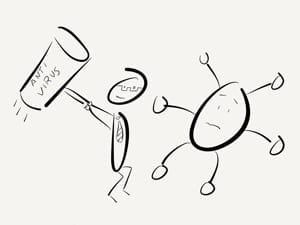 Update 2020: This has long been the most popular link on our website and has been linked to from numerous websites, discussion boards, and even guides. As with many things in IT, technology marches on and as of 2020 one of the best free antivirus options is Windows Defender on Windows 10 which ranks near the top in independent testing. When paired with other Microsoft products like Defender ATP and Intune, it’s hard to recommend any other free products.

The original article and 2015 updates continue below for posterity; however, again, the default Windows Defender is not only one of the best antivirus options overall but also the best of the free options for organizational use.

Last week I mentioned ways of cutting back on viruses within your organization. One of the things I promised was to list the antivirus suites I know of that are free for commercial and nonprofit use. These can be a lifeline to small organizations, but if you’ve grown over 5-10 computers you’ll want to move to an antivirus solution that offers endpoint protection and offers good detection rates as reviewed by independent testers.

The following are free to use for nonprofit organizations but not for commercial/business usage. There are also more options available below in the commercial and nonprofit section.

Panda is actually a relatively heavy hitter in the antivirus world. This incarnation has garnered mostly good reviews; however, it can’t be installed on servers and can’t be centrally managed so it is best suited for very small organizations.

ZoneAlarm has a history of providing decent antivirus and firewall software. The upside is that ZoneAlarm is 100% free for nonprofits; however, like Panda Cloud Antivirus, it can’t be centrally managed so it won’t be suited for larger organizations. ZoneAlarm is not free for educational organizations.

Qihoo 360 Total Security is a relatively new contender that is scoring well in recent (early 2015) comparatives. While I have mixed feelings on Chinese antivirus companies due to active state sponsored cyberwarfare and sketchy private information collection (see Skype TOM), Qihoo 360 appears to be quite solid and it wouldn’t be fair to assume every Chinese software company is actively spying or exploiting on behalf of the government. The licensing only restricts commercial use, making it legal for churches, NGO’s, and nonprofit organizations.

The following are free to use for both nonprofit organizations and for commercial/businesses; however, there may be limitations as to the number of free instances that may be deployed.

Unlike a lot of the other free options, Comodo does offer endpoint management for it’s free antivirus. You can manage up to ten antivirus clients or it appears you can have an unlimited number of installations that aren’t managed. While I used to use Comodo, I recently became fed up due to the addition of bloatware like Geek Buddy and Comodo Dragon, their declining ranking, and overzealous malware detection. Geek Buddy is particularly bad because it is a tier 1 service that according to user accounts breaks things as often as it fixes them. Like my dad used to tell me though: “boy, beggars can’t be choosers” so if you need to manage antivirus for a small group of computers and don’t have a budget, Comodo is probably okay. I’ve barred it from my house though.

2015 Update: Comodo doesn’t seem to be getting ranked anymore, so it isn’t being treated as a leading solution, you should probably go with another solution.

Microsoft Security Essentials gets mixed reviews and has a slightly lower detection rates than the top dog products (around 90% vs 98%); however, you are allowed to use up to 10 licenses for free in business or nonprofit; however, free use in educational environments is not allowed. I have had security essentials catch things that others missed and it does play well with other antivirus applications so it probably wouldn’t hurt to have it installed regardless.

To manage antivirus in the organization, Microsoft Intune can be used for as low as $6 USD a month per computer or $11 USD with software assurance. This also offers additional management capabilities for phones and software deployment so is worth considering as a secondary antivirus for any organization. Fortunately, you can try out Intune for free.

Unthreat is completely free; however, it has an iffy track record for detection. If you have a lot of computers and absolutely no budget it could work, but I wouldn’t recommend it.

Nano is also completely free; however, like Unthreat it has a very spotty detection record and I don’t think I would trust it in my environment. I’d avoid it personally, but it does exist.

ClamAV is an open source antivirus program and staple for a lot of Linux machines. I must confess I haven’t used it much on Windows, but it was pretty decent at finding dormant Windows viruses sitting around on Linux file servers.

If you have a nonprofit that is education based, or a public library that is not profit seeking, then this area is for you!

Avast is one of the leading Antivirus solutions out there so if you are in the education sector, this is the one to go with. Interestingly enough the EULA states it can also be used for business commercial for a single license when it is a sole proprietorship.

For most organizations it pays to have a top notch security solution. You should seriously consider paying for one of the top rated antivirus suites (see chart) or contracting GeekOut Technologies to handle licensing and antivirus for you through our Software Services.

2015 Update: All our managed services include managed antivirus now, taking the headache out of ensuring your systems have adequate antivirus and anti-malware coverage.