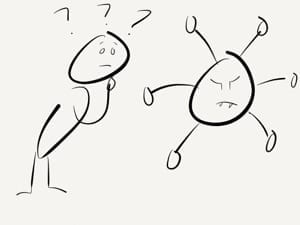 When I first began working in missions organizations in China I had yet to become the network ninja I am today… but I was about to learn a lot! You see we were faced with the challenge of at least one third of staff computers being infected by viruses and malicious software each week. The associated down time was incredibly disruptive to the organization and was resulting in scores of days worth of lost work. We were finally able to bring the problem under control, learning many lessons in the process; hopefully these lessons can help you in your organization!

One of the first things that came to our attention was discovering that the organization had next to no legal software! Almost all the software installed on machines was from pirate versions! As embarrassing as that is for a Christian organization, it doesn’t make good security sense either. Consider this: if someone is unscrupulous enough to violate a copyright and pirate software, they probably wouldn’t bat an eye at inserting viruses and other malicious software that will give them control over your computers. They will make more money by using your computers for spamming, stealing information, botting, etc. than selling or offering free pirated software. The risks far outweigh the reward, and it is much cheaper in the long run to use legitimate software.

The next hurdle is making sure you have a good antivirus suite installed. There are some that are free for use even in businesses, and some that are at least partially free within businesses and still others that are completely free for use in nonprofit organizations. I won’t list all the products here as that will take up a post in and of itself; however, look for a list early next week! As a quick primer though, try and get an antivirus suite that ranks well in independent reviews of detection rates, and if you have more than 10 computers (possibly more than 5), you’ll go crazy chasing up to make sure all the computers are still running their antiviral software and that the definition files are current unless you have an endpoint management set up!

One day as I sat in my office in China, which was in fact an enclosed balcony that sometimes filled with water, I observed one of the staff’s daughter come into the office, sit down at a computer then begin installing software to listen to music. The computer was infected with viruses within the day and needed to be completely rebuilt. The lesson learned was that we needed to control who could log into computers and what level of permissions they had to do things. For us that meant setting up a directory service on a server to control who could do what on each computer.

I found that one of the best ways at boosting productivity and reducing viruses was to filter the internet. I had set up a Linux based gateway/router solution that was originally meant to speed up the internet by caching internet requests (so if 10 staff want to open Google the router really only had to get the page once). As it turns out the setup was perfect for running a filter system as well so I had the server automatically update with known good and bad sites as well as turn off some categories of sites (no more Chinese versions of Youtube during working hours!).

When a virus does get through, you don’t want staff sitting around with nothing to do, or at the very least minimize that time where you can. Make sure there are backups to revert back to or that an automated installer can quickly set up the system. You should also centralize file and user account so that an employee can jump to another computer if need be. I used to keep an older emergency computer on hand to drop into place while computers having issues could be repaired; it let staff stay in the work space they are comfortable with while retaining all their files and settings.

I hope this post has been helpful for you to take steps in your organization to reduce viruses and malicious software. Stay tuned for the listing of free antivirus programs for commercial and nonprofit use. If you are having trouble with viruses, GeekOut Technologies can help. We offer Managed IT Service Plans, Managed Antivirus, virus removal, and Microsoft Intune; all designed to secure your network against viruses. Contact us today!